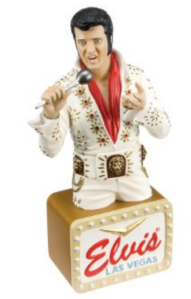 We invite proposals for an interdisciplinary conference on the star persona of Elvis Presley. The one-day event will be held at the University of Kent on the 3rd of June, 2017.
Since Elvis Presley’s rise to stardom, his star image and persona has been used to sell products. However, it is through his death that his name and image can be found in seemingly unrelated locations and commodities. The estate’s company, Elvis Presley Enterprises, has attempted to further Presley’s fanbase through re-releases of his music, Graceland, and most recently, an exhibit at the O2, London. The combined effort of the Authentic Brands Company, EPE, and the ability to re-create Presley through fictional and non-fictional texts, has allowed Presley a unique position in contemporary culture.
To celebrate the upcoming 40th anniversary of Elvis Presley’s death, this conference will attempt to re-evaluate and explore how Presley’s star persona continues to be a commercial success. Commodities; re-runs of television documentaries and concerts; re-mixes of Presley’s music; tourist attractions and the expansion of Graceland’s entertainment complex, are just a few of the ways that Presley’s ubiquitous stardom is presented and sold to contemporary society. Through this conference we would like to explore the connections between consumer culture and stardom, analysing how Presley’s star history has allowed his continued presence in today’s culture.
Potential topics include, but are not limited to:

The legal restrictions on Presley’s image
The history of Elvis Presley Enterprises
Musical legacy
Fashion, style and Elvis
The re-mixes of Presley’s Sun and/or RCA recordings
Graceland’s history and/or recent expansion
Tourist attractions and events
Re-runs of documentaries, concerts or films
Contemporary duets, such as with Michael Bublé or Barbara Streisand
Collectors
Fans’ reaction to consumer goods
The biography
Fan magazines/special issues
Impersonator competitions and/or the business of performing as Elvis
Multimedia concerts and Presley holograms

The conference welcomes abstracts for video essays, performance, multi-media presentations and traditional papers. Please note that outstanding papers will be offered a chapter within a publication. In addition to the conference, participants are invited to take part in a screening of a Presley concert, with potential other Presley activities yet to be confirmed.
Potential contributors should submit abstracts of 300 words and a short biography to alwaysontheirmind@gmail.com by December 31st, 2016.