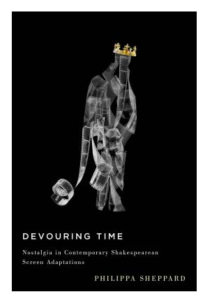 From Kenneth Branagh’s groundbreaking Henry V to Justin Kurzel’s haunting Macbeth, many modern filmmakers have adapted Shakespeare for the big screen. Their translations of Renaissance plays to modern cinema both highlight and comment on contemporary culture and attitudes to art, identity, and the past.

A dynamic analysis of twenty-seven films adapted from Shakespeare’s works, Philippa Sheppard’s Devouring Time addresses a wide range of topics, including gender, ritual, music, setting, rhetoric, and editing. She argues that the directors’ choice to adapt these four-hundred-year-old plays is an act of nostalgia, not only for the plays themselves, but also for the period in which they were written, the association of genius that accompanies them, and the medium of theatre. Sheppard contends that millennial anxiety brought on by the social and technological revolutions of the last five decades has generated a yearning for Shakespeare because he is an icon of a literary culture that is often deemed threatened.

Authoritative and accessible, Devouring Time’s investigations of filmmakers’ nostalgia for the art of the past shed light on Western concepts of gender, identity, and colonialism.

Philippa Sheppard teaches Renaissance and modern drama at the University of Toronto.