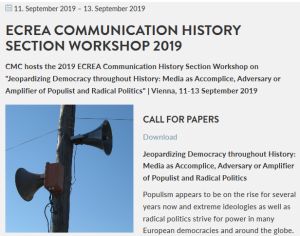 Jeopardizing Democracy throughout History: Media as Accomplice, Adversary or Amplifier of Populist and Radical Politics
Populism appears to be on the rise for several years now and extreme ideologies as well as radical politics strive for power in many European democracies and around the globe. Public debate and political pundits suggest that there is a link between the proliferation of radical politics, trenches of polarization between political camps and across societies on the one side and contemporary media environments on the other. The emphasis on allegedly new phenomena such as fake news, echo chambers, hate speech or digital platforms as drivers of political polarization and as vessels of agitation, often neglects that mediated communication has always played a vital role in both safeguarding democracy as well as putting it in jeopardy.
For this workshop, the ECREA Communication History Section invites scholarly presentations to shed light on political communication that fosters populist and radical politics in a historical perspective and across various political and cultural settings in Europe and beyond, to learn from the past for contemporary challenges.

For more information on the workshop please visit: https://www.oeaw.ac.at/cmc/detail/event/ecrea-communication-history-section-workshop-2019/

The goal is to understand the role media played as potential accomplices or carriers of populist agitation (e.g. in autocratic regimes or out of commercial premises), and as amplifiers of extreme political positions or groups and populist sentiment (e.g. sensationalist and simplistic reporting or excessive coverage for populist tropes). Media and mediated communication can however also act as countering forces and adversaries of radical politics and aim to tame blatant populism or maintain forums for civilized debate. The workshop is also interested in works that help to deconstruct or re-evaluate assumptions about counter publics, alternative media, both for democratically progressive or rather revisionist and reactionary goals, and it aims to assemble a broad portfolio of perspectives on the topic covering a variety of historical periods, national or supranational settings and media involved. We are interested in research that addresses the full scope of media history from early prints to the digital age.

More specifically, this ECREA Communication History Section Workshop will be open to papers dealing with:

– Populist communication strategies over time, spreading mistrust against social, cultural or political elites. We are interested in studies of how this played out in various settings and what communicative strategies were employed by populists from different political camps and for various ends. The anti-elite stance of populist rhetoric includes antagonizing legacy media and the institution of journalism, to discredit information and critical coverage. How was “the press” or were “the media” but also “science” antagonized by populists, and how did in the contrary media portray their own role as an antidote against populism and as guardians of democracy? Did the media contribute to the rise of populism by providing a forum for populist actors or being advocates on behalf of the people, with a critical attitude toward power holders and building on the same principles as populist communication? And for what reasons (power, influence, profit, ideology…)?

– Rumours, myths, lies and conspiracy theories. All of them have a long history of being used as a pretence to spark public outrage, or moral panic, to motivate uprisings or isolate social groups as scapegoats or fall guys for political gain. The workshop is interested in popular myths, catastrophic rumours and allegations as means of political controversy and the strategies and logics of fear mongering.

– Simplistic answers for complex problems. Typically, populist rhetoric is anti-elite and advocating for an ingroup (us) which would be threatened or abused by the elites or a perilous outgroup (them). We are interested in research, highlighting the historical dimension of propaganda against vulnerable social groups, minorities, foreigners, socially weak, handicapped, anti-Semitic or misogynist agitation.

– Persistence and discontinuities in how alternative media reached out and aimed to mobilize, inform or counteract public communication. In how far were the public observation and valuation favourable to such endeavours and when was it critical? How do the features and affordances of certain media support populist agitation, and can populism be linked to specific media ensembles?

– Political extremism and mainstream politics. What is considered a “radical” position is not an absolute but relative and transient. The workshop will thus welcome contributions which address the construction of mainstreams, centres, peripheries and extremes in political debate, public discourse or academic analysis, and how these categories were used to isolate certain positions and how the boundaries of public debate have shifted over time.

– Media governance and democracy. How were media considered responsible for the preservation and defense of democracy in different historical periods and geographies? How did governance institutions and regulatory bodies address issues of media freedom, and how did authorities act against radical agitation or mute legitimate public critic?

– Theoretical reflections on how current theoretical and methodological approaches be transferred to past scenarios. Is the research into populism antagonizing legitimate political voices and critique and contributing to political hegemony by how research approaches subversive forces? How do and did media and communication scholars normalize some communication practices and pathologize others? Which myths and narratives are cultivated by media research, and how do prevalent concepts, eligible methods and accessible sources shape and foster certain understandings of problematic populism or romanticized counter-publics and civic engagement?

Abstracts of 500 words proposing empirical case studies as well as theoretical or methodological contributions should be submitted no later than 30 April 2019. Proposals for full panels (comprising 4 or 5 papers) are also welcome: these should include a 250-word abstract for each individual presentation, and a 300-word rationale for the panel. Send abstracts to: cohecrea2019(at)yahoo.com. Authors will be informed regarding acceptance/rejection for the conference no later than 15 June 2019. Early career scholars and graduate students are highly encouraged to submit their work. Please indicate if the research submitted is part of your thesis or dissertation project. The organizers will aim to arrange for discussants to provide an intensive response for graduate students projects.